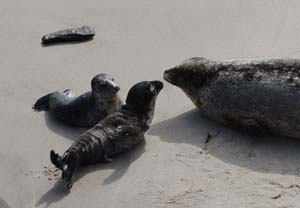 1. January 26, 2010 A plump, healthy black pup with white markings was born on Tuesday, about 6 am. The mother, scared and confused, went into the water, leaving the pup to fend for itself for a long time. The mother never returned to the side of the newborn, and after a 24 hour wait, SeaWorld Marine Mammal Rescue rescued the pup and took it to their rehab facility.

2. January 29, 2010 Born 3:00pm. Short delay in pulling off the placental sac held us in suspense, but mom, the gulls and the pup managed to pull it off. Pup was named Moonshine and went swimming an hour later. Small for size with a dark speckled fur, but looks active and mom is doing a splendid job.

3. February 2, 2010 Another pup was born and named Donna in honor of in City Councilmember Donna Frye. Pup is long-bodied but not chunky yet and light in color but dark on top with noticeable vertical wrinkles still on its body.

5. February 11, 2010 Holly was born very late at night. She’s light with muted spots and a white belly especially when dry. The pup is strong and plump and her mom is “Thistle” who is recognizable by the yellowish tone around her eyes.

6. February 11, 2010 Sea Star was born early in the afternoon. Pup is light in color and strong and “chunky”. Her mom has been named “Autumn.” Shortly after Sea Star’s birth, we had very high tides and rough surf, and Autumn wasn’t able to find her pup and kept going around sniffing at other pups. As it turned out, Sea Star had ended up on South Casa Beach and didn’t make it back to her “home” in the rookery until the 14th. She was searching and crying for her mom and going up to other seals trying to find her. Although Autumn found her pup, she didn’t seem to be able to recognize her. Most likely they hadn’t had adequate time to bond which is how they identify each other by scent.  SeaWorld Marine Mammal Rescue has come several times in an attempt to rescue Sea Star, but hasn’t yet found an opportune moment. Please check back for an update and let’s hope for the best!!

9. February 18, 2010 Pup was born in the middle of the night and named June Bug. She is light gray and silver.

1. October 17, 2009 Female miscarried. It’s extremely unusual for this to happen as early as October.

4. December 16, 2009 Another report of a premature pup birth that did not survive.